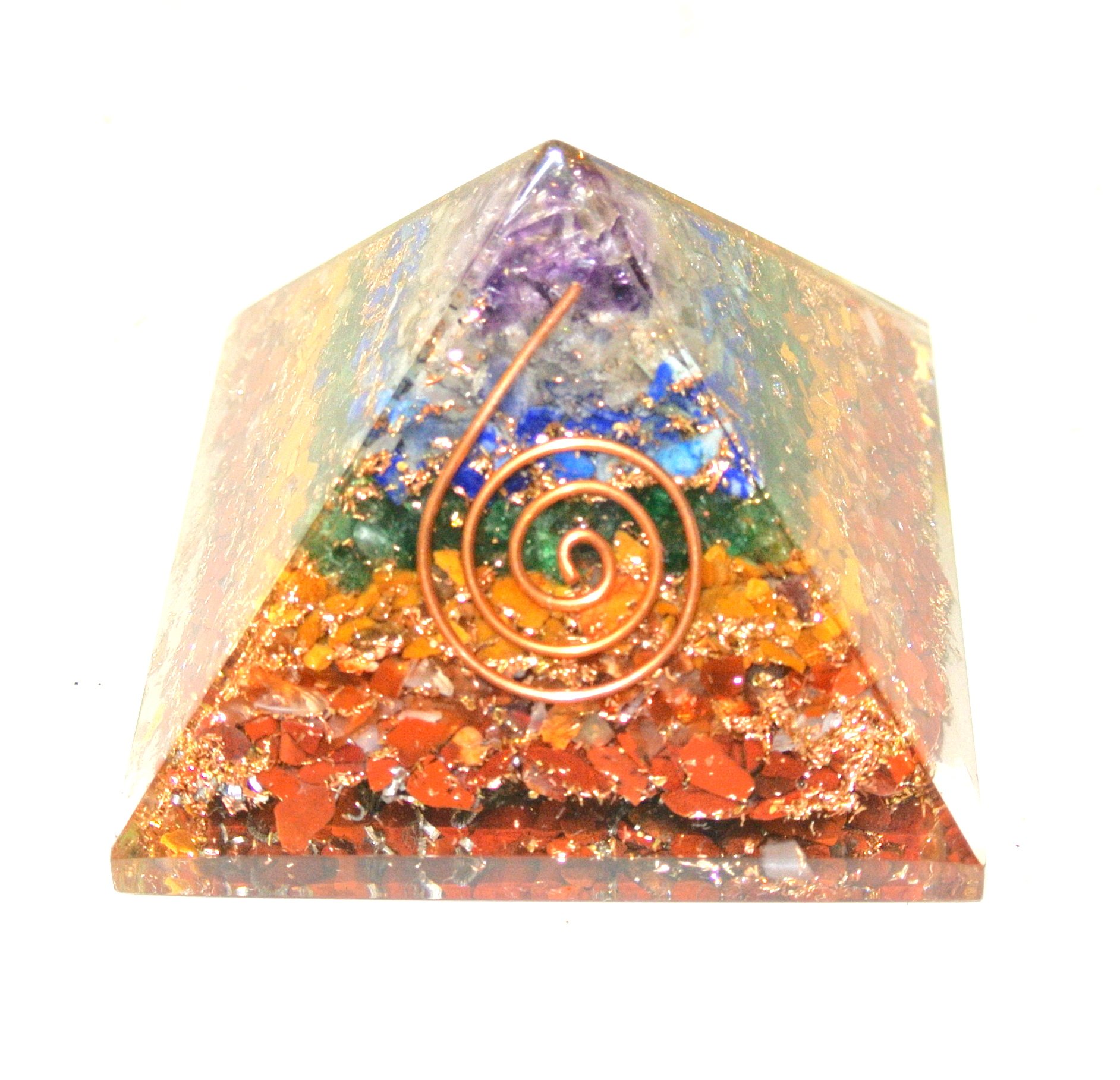 This Chakra Crystal Reiki Orgone Pyramid is an Orgone energy pyramid created to channel orgone energy through stones and crystals in line with energy moving through our body chakra energy system. It has crystals and stones layers ordered according to the chakra centers of the body where each stone is believed to open and enhance the energy in the bodies corresponding chakra. Energy rises throughout the system becoming finer

The Chakra Crystal Orgone Pyramid has crystals and stones layers ordered according to the chakra centers of the body where each stone is believed to open and enhance the energy in the bodies corresponding chakra. Energy rises throughout the system becoming finer and more in tune with our true self at the crown chakra.

The copper accumulator, which can be clearly seen,  is stated as being:  “the infused Reiki power symbol Choku Rei means

the power of the universe”.  The copper accumulator looks similar but the actual symbol looks like this:

The  Reiki symbol as shown left is similar in appearance to the accumulator in the Chakra Crystal Orgone Pyramid.

(The Shoku Rei symbol image and information on this symbol can be found here:  Shoku Rei)

The chakras are described as being aligned in an ascending column from the base of the spine to the top of the head. New Age practices often associate each chakra with a certain color. In various traditions, chakras are associated with multiple physiological functions, an aspect of consciousness, a classical element, and other distinguishing characteristics. They are visualized as lotuses or flowers with a different number of petals in every chakra.

The chakras are thought to vitalize the physical body and to be associated with interactions of a physical, emotional and mental nature. They are considered loci of life energy or prana (which New Age belief equates with shakti, qi in Chinese, ki in Japanese, koach-ha-guf in Hebrew, bios in Greek, and aether in both Greek and English), which is thought to flow among them along pathways called nadi. The function of the chakras is to spin and draw in this energy to keep the spiritual, mental, emotional and physical health of the body in balance.

This image gives a good Western basic concept or the chakra energy centers and is borrowed with thanks from The Dao of Dana.

The colors of the chakras are set in the Chakra Crystal Orgone Pyramid from the base to the crown at the apex.

To see more about Chakras in an orgone obelisk pyramid that is also structured around our chakra system, see the post on the Orgonite 7 Chakra Stones Rainbow Orgone Pyramid Obelisk here.

Information About the Chakra Crystal Orgone Pyramid From crystalshopindia

What is Orgone? The word orgonite comes from “orgone”, the name given by Wilheim Reich to vital energy found everywhere in nature. It is life energy, also called Ch’i, Prana, Aether. This vital energy exists, in a natural way, under many different forms. It can be neutral (OR=orgone), positive (POR=positive orgone energy) or negative (DOR = deadly orgone energy). When positive, it enables living organisms to exist in a healthy state. Reich did a lot of research on the properties and behaviors of this energy. He built an orgone accumulator out of alternate layers of metal and organic material. He also observed that OR was able to neutralize nuclear radiation.

It is important to understand what DOR is. DOR is (P)OR, but “armored” as Reich called it. “Armoring” means that the life energy does not flow freely anymore, but has been encapsulated into a rigid form. When a knight puts on his armor, he cannot move freely anymore; he is restricted in his movements. The same with energy: when energy gets “armored” it does not flow freely anymore. Look at nature. When water flows freely, is full of vitality and life in it flourishes. When water becomes stagnant, it becomes like a stinking pool, and life in it dies. DOR is negative, that is, it suffocates life forms. It creates disease, and ultimately it will cause death. DOR energy is primarily human made, by technology, like machines and microwave transmitters, chemical pollution, physical destruction of the landscape, but also by human emotions. A place where a violent death occurred, for example, will retain the DOR imprint on that location for a long time. A house where the inhabitants have a lot of negative emotional outbursts will also be laden with DOR. The human body itself can also be armored, that is, by life long emotional problems, man’s creative expression can be blocked or dammed up, causing contraction of his energy system, quickly or slowly leading to disease.

As human beings, we are open energy systems. This means that we cannot shield ourselves completely from our environment. We are constantly subjected to the energies in our environment. They affect us whether we are aware of it or not. Therefore it is important to transform any DOR that comes to us into positive POR.”

ORGONITE  7  CHAKRA LAYERED PYRAMID Everyday Use of this Orgone Pyramid. Place your Orgone Pyramid in your living spaces; where you work, sleep, and live. It will keep the energy clean and healthy. We have found that they are most effective when one flat side is facing magnetic north. Although it still has a measurable effect up to 25 feet away, by placing them within 3 feet of yourself, you will experience optimal benefit. Occasionally place them in direct sunlight. This makes them many times stronger. I’ve been told they radiate more “light”.